Last time I described my first day in Hong Kong, transferring from the airport to the city, getting lost in the multiple footbridges, visiting the mid level escalators and the amazing view from the peak. Today I will continue describing the following day: Boarding the starferry, walking through the avenue of the stars, checking-in in a hostel at the Chunking Mansions, getting a different panoramic view on the Sky100 and finally getting a glass of red wine on a random bar near the mid level escalators.

Star Ferry and avenue of the stars. 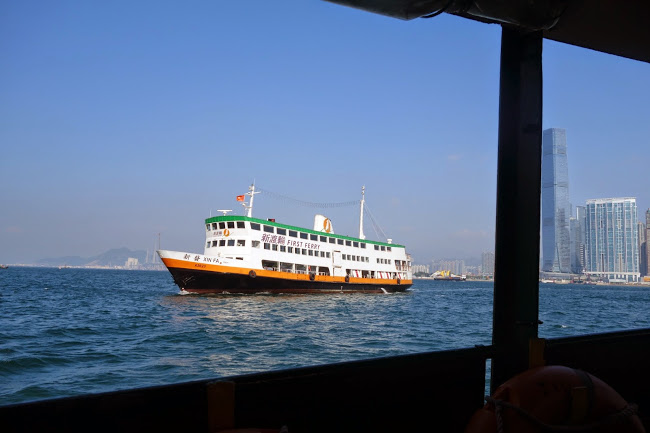 On the second day as soon as we checked out from our hotel in central, we headed to the piers to get the a ferry and cross to the other side of the bay. The main Honk Kong island is separated from the Kowloon peninsula by the victoria harbour, and even if they are connected by bridges and subway lines, one the most interesting and cheapest way to cross the bay is to do it using the Starferry passenger service.

The company has been running these ferry lines since 1888 and even if the boats have changed through the years they still have a very nice vintage look. Also by taking the ferry you get an amazing view from Hong Kong Central: 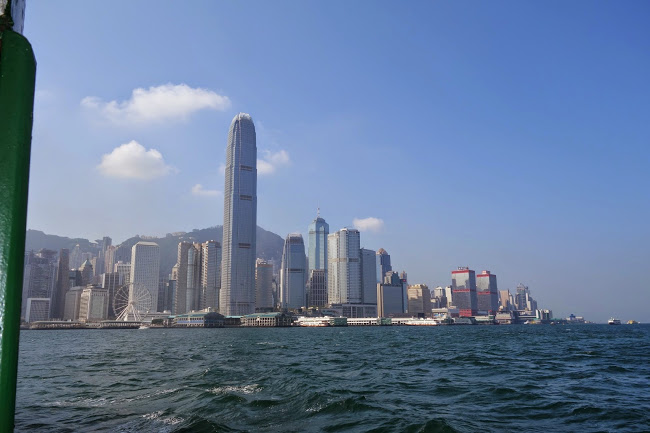 The ferry arrives at the Tsim Sha Tsui pier where there is a nice clock tower. From here it's possible to continue walking along the coastline, reaching the avenue of stars. This is the Hong Kong version of the Hollywood Walk of Fame, with statues and plaques honoring the most distinguished actors and directors of the HK film industry. There were a lot of unknown names to me, but I was able to spot a statue of Bruce Lee and a plaque of Jackie Chan: 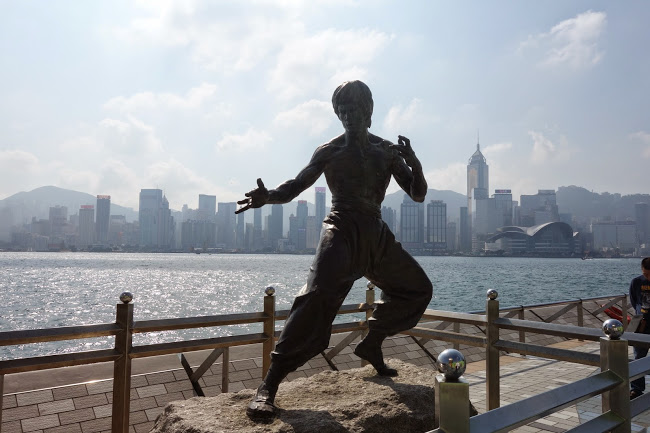 One we reached the end of this avenue, we headed back, stopping for an iced Coffee because it was really hot and then we started to walk toward the hostal where I was going to spend the rest of the week (my friend was flying back on the evening).

When I chose the hostel, I was looking for something cheap and located close to the center, so unknowingly I ended up booking a place in the Chungking Mansions. If you haven't heard about this place, it's a huge building containing a lot independent low-budget hotels, restaurants, clothing shops, foreign exchange offices, etc. The entrance to the place is full of touts trying to lure you to their businesses. 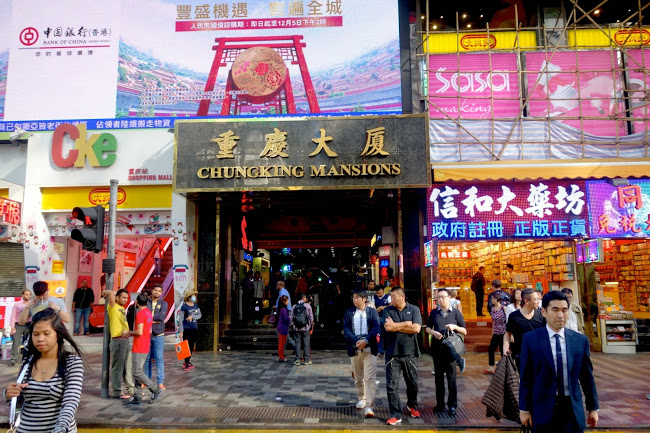 Something we learned very quickly was that the building is composed of five blocks and there are 2 elevators in each block, because we took the first elevator (block A) and it didn't have the floor of my hotel! After wandering around on the ground level, we finally found the elevator of the block E, where the hotel was located.

The check-in scene was surreal: We arrived to a door with the hostel name, we knocked on the door several times until finally an Indian guy opened the door not looking very happy. When we told him I had a reservation, he let us in and showed us the way to the reception area, through a narrow corridor.

When we got there, an argument was already going on between two eastern european looking girls and the Indian woman on the reception. She was telling them they didn't have a reservation for the next day and that their room was already taken. They were arguing that the girl the night before told them they didn't have to pay to reserve the room. The argument was going back a forth until another indian guy working there settled the conversation with more or less: "Look if you pay you get the room, if you don't pay you don't have a room. You didn't pay so no room!".

Fortunately another different Indian guy took care of my reservation and after waiting for around 15 minutes I got the room, I left my stuff and we continued exploring the city.

When we left the hotel we started walking towards the ICC building in West Kowloon to get another panoramic view of the city, this time from the other side of the bay. We crossed the Kowloon park, visited the terminal ferry and after walking through an area of heavy constructions we arrived to the building. The Sky100 observatory is located in the 100th floor and offers some amazing views of the Hong Kong Island, the Victoria harbor and the north part of the city: 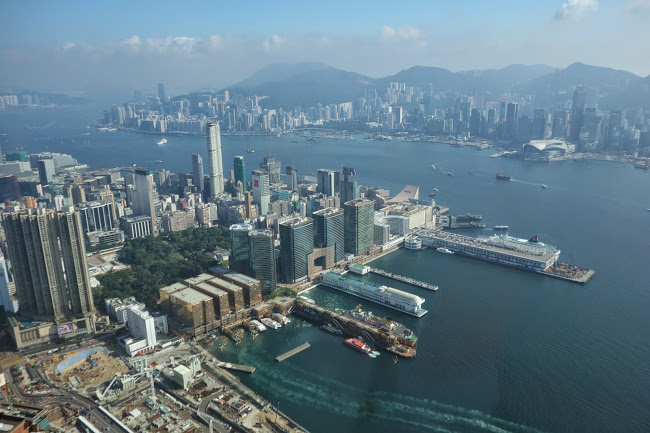 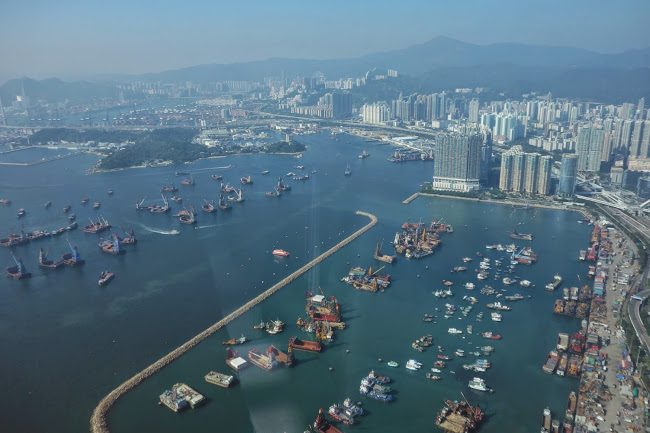 After we descended, we went to the nearby west kowloon waterfront promenade. We did as the locals do and we squeezed ourselves through a broken mesh and walked on the top of some rock barrier in the pier. We continued walking through the promenade and stumble upon a festival with food stalls, music and some people doing acrobatics. 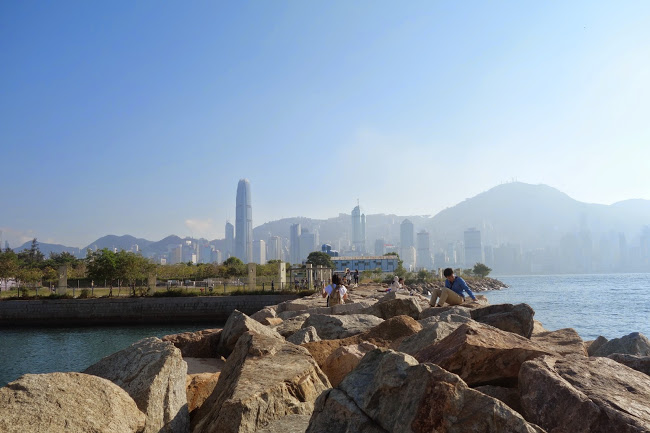 We continued the day by making a quick visit to the university on the north part of the city. This was interesting because we went by subway and we were able to see how big is the city. Even if on the metro plan the university appeared to be only a handful of stops away, it took us a long time to reach the place. The other interesting part of the visit was the graduation day taking place on that weekend. The graduates were wearing their typical cap and gown, but additionally most of them were having a plush toys with graduation motives as well. The plush toys were as important as any other family member in the pictures!

We finished the day by visiting again the mid level escalators looking for a bar to get a glass wine. We ended up in an "Iberic" themed placed serving some quite decent Portuguese and Spanish wines. The bartenders were extremely friendly and we engaged in a conversation with a Swiss couple nearby.

My friend took the train to the airport to catch her flight back home (that ended up being cancelled, but that's another story) and I took the starferry to go back to Kowloon. When I arrived there and I saw the waterfront illuminated with neon lights and I took a picture, thinking on how lucky I was to be there. 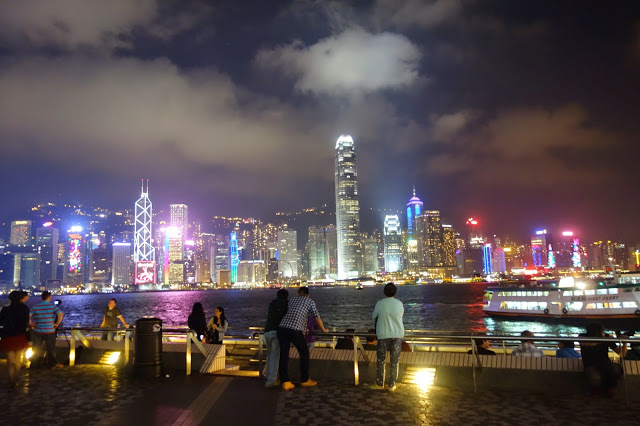