The giant rubber duck and the world is a handkerchief 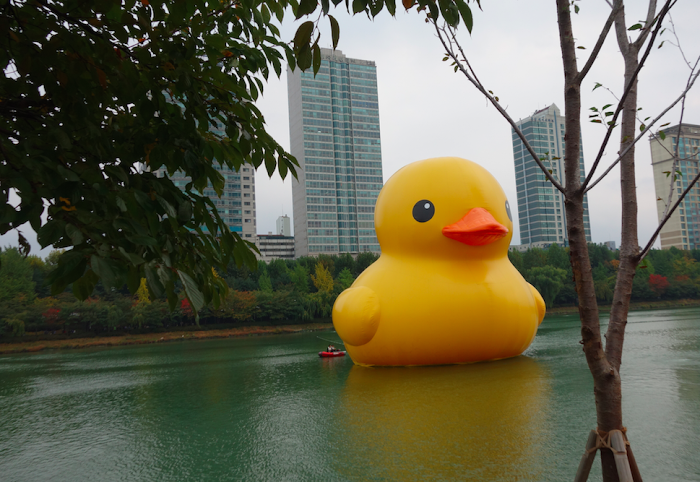 Yesterday I arrived back to Seoul where I will spend the last couple of days in Korea before heading off to Japan. I wrote to J, the Korean friend who helped me a lot during the first days of the trip and asked her if she would be interested to meet again before I leave so I could to say bye. She proposed to meet up near to the Seokchon lake to see a giant Rubber Duck.

I saw a couple of pictures on the web and I thought it was a different but interesting plan (I had never seen a rubber duck I couldn't squeeze). This massive sculpture floating in the middle of the lake was definitively a new one for me and you can see in my picture that this duck is gigantic (look at the boat and the buildings to get an idea of the scale).

I was reading this is not the only one but it’s part of a set of some massive sculptures designed by the Dutch artist Florentijn Hofman. The place was completely packed and we walked around until we found a couple of good photoshoot spots.

When we finished going around the lake, she walked with me to the subway station but when we were halfway through, a Korean girl that was walking behind tapped my shoulder and asked me "Excuse me, but by any chance are you Juan?". I turned around completely perplexed and replied  "Yes I'm" and then with a smile on her face she started to say "Well I'm …" and I interrupted her saying "C!. Wow, amazing! It's very nice to see you!" and we chatted for a couple of minutes, while her companion told me that she had been asking herself if I was who I'm for the previous 5 minutes.

Now my friend J. was as surprised as you might be right now, so she asked me "what was all that about?" and I told her the following unbelievable story: Many years ago I joined this website site called Couchsurfing to meet up people while traveling to other cities and to show Dublin to the travelers who were interested while visiting my adopted hometown. C. Visited Dublin some years ago and I met her one afternoon to show her around. We haven't seen each other since then and suddenly we bumped into each other on a random street of Seoul, a city with more than 11 million inhabitants, an area of 605.21 km2 and composed by 25 different districts!

My mother used to say often that the world is a handkerchief, meaning that it's small world. I agree with this idea, but I have never experienced it in such a dramatic way!