The morning after I arrived to Siem Reap, I was eating a nice breakfast in the hotel and suddenly the owner approached to talk to me: "Last night we didn't have time to talk about the city and the temples. If you are interested I can give you a short introduction". Of course I was interested and after our useful chat and a brief reading on the Angkor Wat wikitravel page, this is what I learnt:

I thanked the owner for all this information, I finished my breakfast and I left the hotel in order to walk around the city. I wanted to understand its layout and to get a bike to start exploring the Angkor Wat complex. As soon as I hit the street I was bombarded with offers for massages, tuk tuks, motorbikes, trips, offers, etc, but in most of the cases a smile "no, thank you" was good enough.

As I was mentioning before Siem Reap is relatively compact so I was able to stroll through the main roads fairly quickly and I got a good idea about how get to the main places. One of the nicest places a visited during this morning promenade was the Pokambor avenue, next to the Siem Reap river, starting in the old market and finishing in the Royal Gardens.

This area of Siem Reap is more quiet and it has less traffic that the main Sivatha road. There was an open air exposition with very nice photographs of Cambodia, Laos, China and the Mekong River. When I finished the walk I started to head back and I found a small store in Son Sak road, relatively close to the hotel.

They had bikes to rent and I really liked they didn't ask for a deposit or the passport. Just giving the address of the hotel was good enough for them. I got a bike for next 4 days.

It was quite hot at that moment so I went back to the hotel took a shower and once the sun was more bearable I started to bike to the Angkor Wat complex to get the pass I was going to use in the following days.

I started my trip at the hotel Son Sak road, when I arrived to Sivatha road I turned left and I went north all the way. I passed next to different buildings and after 3 or 4 kilometers, the constructions were gone and there were only trees and small stands selling petrol and food.

I was expecting to find a booth to buy the temple pass but I stumbled with the first "official check point". I asked the lady: "Where I can buy the Angkor Pass?" and she told me "Oh no you forgot to turn right some 5 kilometers away, where the main entrance is". I thanked her but as soon as I was about to leave she asked me if I had plans for tomorrow because she knew a good driver and … no thanks no thanks.

I started to cycle back and a couple of kilometers after, I found a small road heading to the Charles De Gaulle road where the main entrance is located. I arrived there paid the fare and headed back my newly printed pass. It was getting late so I only paid a quick visit to the main Angkor Wat temple, but this short visit was a good apetizer to get an idea what I was going to see in the following days.

When I arrived to Angkor Wat this is the image I got for my first impression: 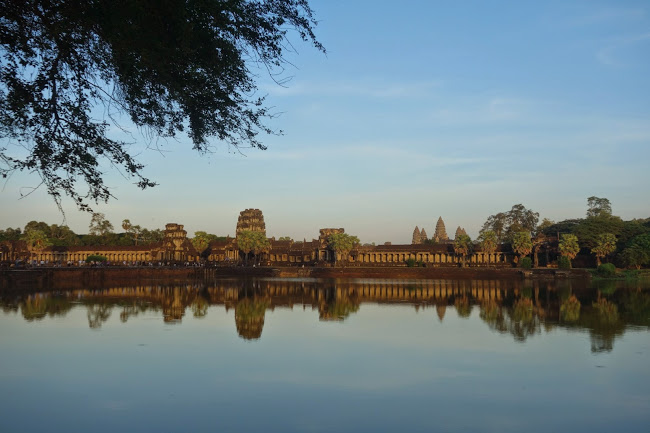 I knew at that point that the visit to Siem Reap was definitively worth it and I was looking forward to the following days.