Visiting the Korean DMZ by train 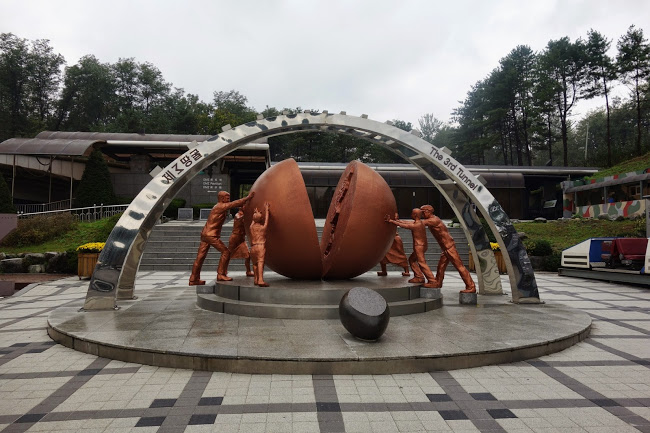 Last week I wrote a blog post about the memorial of the Korean War. I described how this place was very informative, taking the visitors from the division of the Korean peninsula on the 38th parallel all the way to the final battles leading to the signing of the Armistice in 1953.

Last Thursday I had the opportunity to visit the Korean DMZ Zone that was established during that 1953 treaty and I got a chilling reminder that this war technically is not over because a permanent peace treaty was never signed.

This is the story about visiting the DMZ on a rainy day using the DMZ train.

1. Finding out how to get there.

It’s possible to visit the DMZ zone but you cannot show up on your own because this area is under the category of “Civilian Control Zone” (strictly controlled by the government and the army). Only the military and the residents of that area have free access to this place. The rest of the people require a special pass. So you always need to be part of a tour.

I really wanted to visit this place because not everyday you have the opportunity to see one of the last remnants of the cold war, but the idea of the "tours" described in different brochures were not too appealing. Fortunately once I was transferring in the Seoul station and I saw some advertising regarding the DMZ train.

I went to the information booth to ask about this option and a helpful girl with some basic English explained me what the DMZ train was about, how to buy the ticket, what were the prices and finally handed me over the schedule for the return trip.

I bought the return DMZ train tickets for the afternoon on the day after with the final destination of Dorasan. I went early to the Seoul station, took a coffee boarded the train and the first thing a noticed was the “theme” of the train. It’s painted inside and outside with “peace and love” colorful motives and messages. 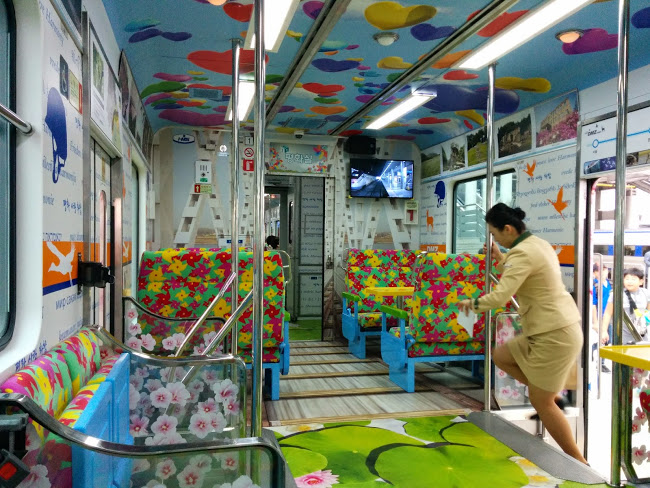 But quite quickly the lady you can see in the picture ran to my seat and asked me “Are you going to visit the DMZ?” and I replied doubtfully “Yes?” and then she told me “Well, because in that case you need to fill out the following form. You need to define if you want to do the Dorasan walking tour only or if you want to book a tour including the third tunnel as well and please show me your passport.” 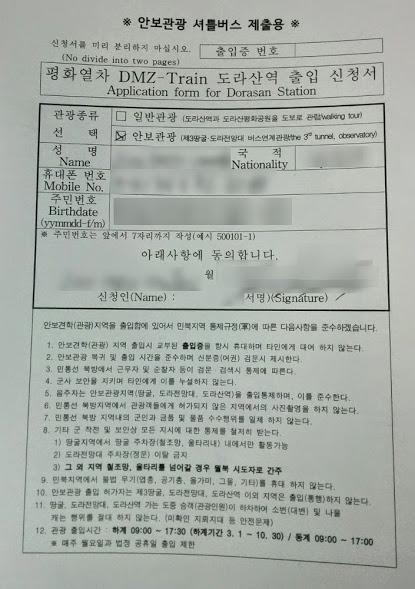 The third tunnel sounded interesting since we missed the cu chi tunnels in Vietnam. Once you make a choice and they collect the forms you can’t change your mind because they give you a badge with an specific color.

3. Riding the train and exchange at the Imjingak station.

The train started to move along north, slowly leaving Seoul, passing through different suburbs. I was a little bit disappointed because the sky was overcast and suddenly it started raining quite heavily. I thought that maybe it was not best day to visit the DMZ, but I decided to enjoy it as much as possible. 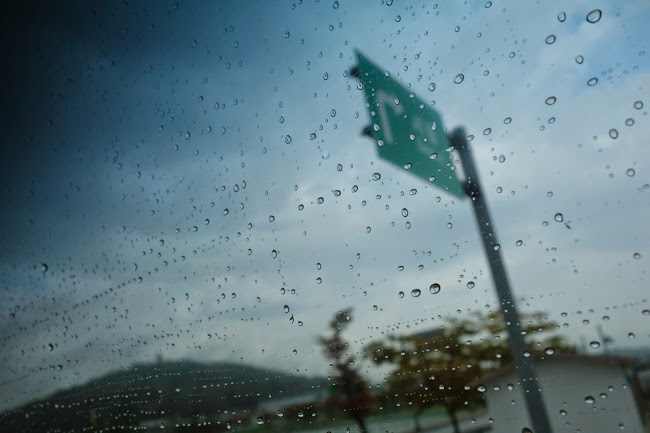 It passes through different towns and stops a couple of times. It was interesting to see on those suburbs huge apartment complexes near to some factories and after a couple of stops more then it’s clear you are entering the DMZ zone because this is what happens as soon as you reach the Imjingak train station … 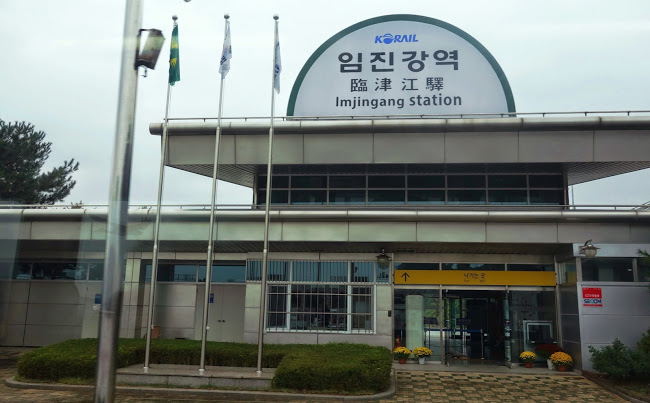 Everybody is politely but firmly asked to leave the train, they double or triplecounted the number of passengers. Then each one handed over the form stating what type of tour was planned and then different lines were formed based on the form preferences. The soldiers checked the identity of each traveler and then a badge was given to each one us (like this one): 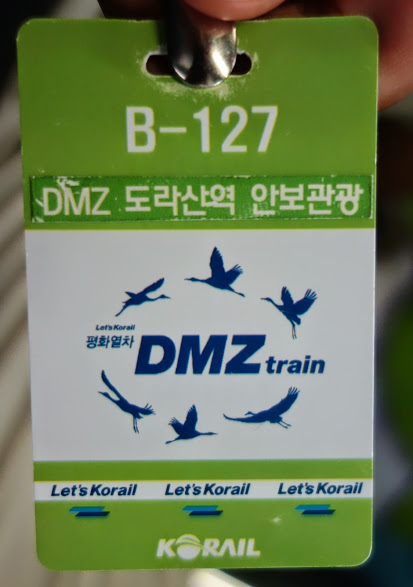 Then we were asked to go back to the train and a group of soldiers boarded the train to escort the last leg of the trip until it got to the final station. 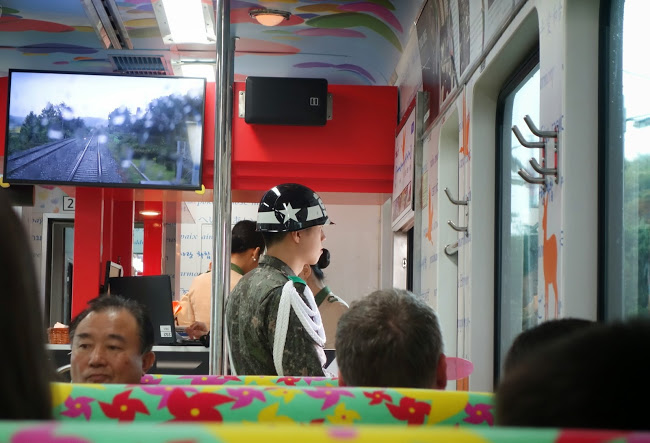 When I looked at the window and checked my position on the GPS I understood why there are so many procedures and military presence. We were very close to the South Korean part of the DMZ demarcation line established in the 1953 agreement.

Suddenly there were no buildings, just beautiful landscapes, but surrounded by high barbed wire and watch towers. At this point there were no more stop, the train crossed the Imjingak river and then began to run through a track separated by barbed wire all the way to Dorasan. 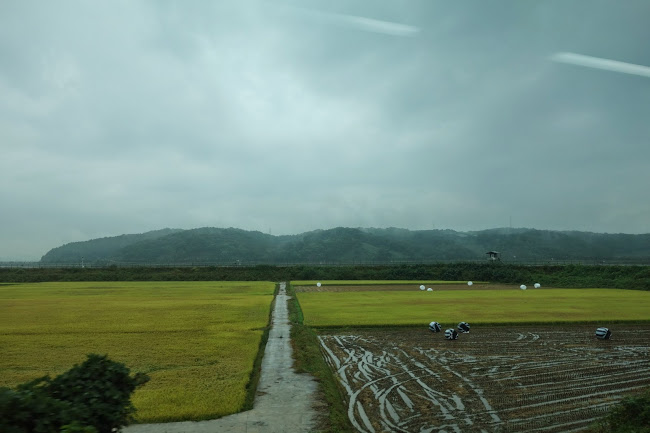 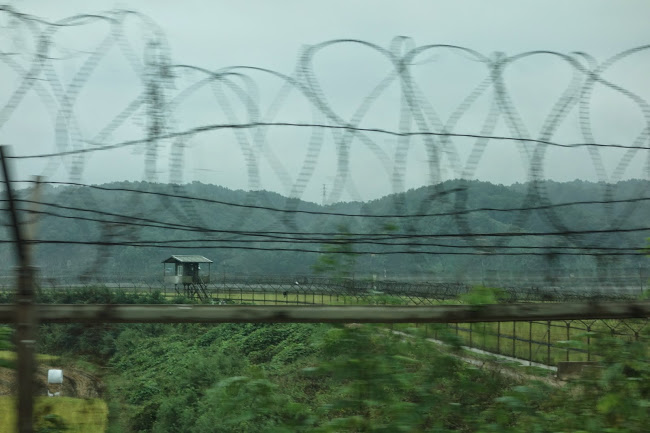 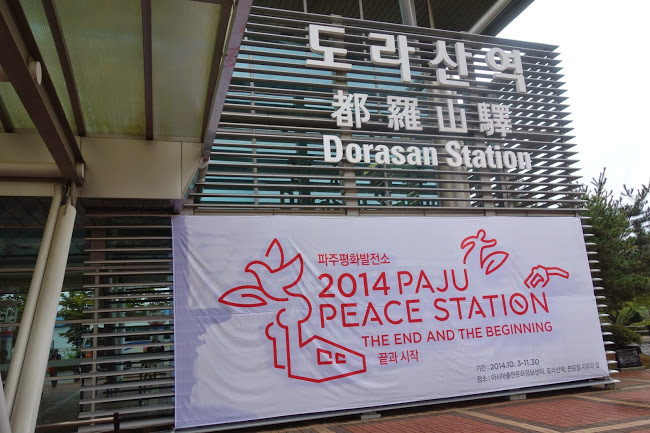 Dorasan is the last train station in South Korea in the northbound direction. Before the war this station was part of the Gyeongui line that used to link the south with the north of the peninsula, but after the war the 2 parts were separated and this station became non-operational for a really long time.

In early 2000 the governments of both the north and the south agreed to connect the line again but for now it's used only for tourism passengers. Based on the station structure and the information panels, it's clear they hope one day the train will go all the way to Pyeonyang. 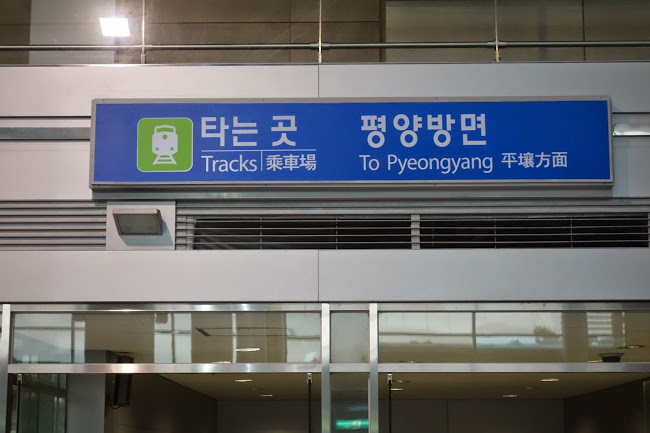 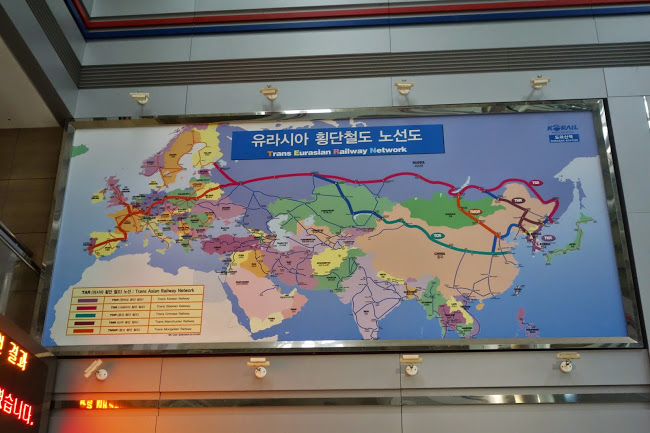 After arriving to the station the first thing we needed to do was to buy a ticket for the tour we intended to do. I bought the third infiltration tunnel and observatory ticket, left the station on the opposite side, boarded the tour bus and we went to the first stop the Dora observatory.

This post is getting too long. So I will split it in two parts. I just published the second part of this "visiting the Korean DMZ by train"