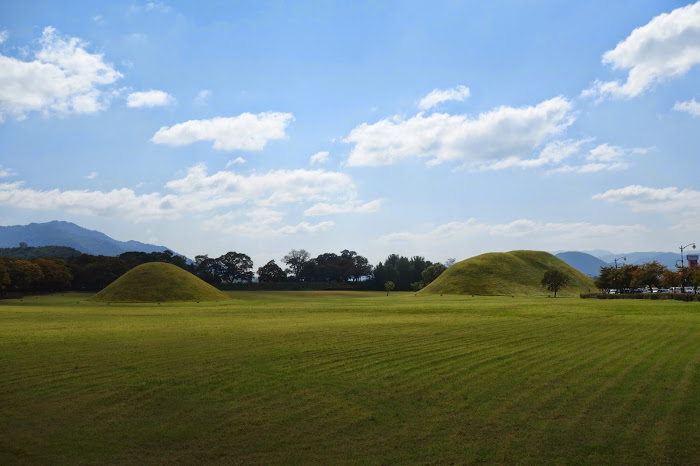 When I was planning to visit Korea I started to investigate what cities and towns would the most interesting ones besides the obvious Seoul. I picked Busan and Jeju Island, but when I was talking to J., the former flatmate of my Brazilian friend, she suggested to visit Gyeongju as well. In her words Gyeongju is as a small city full of historical spots to visit.

I decided to follow her advice so before coming to Busan, I made a short stopover in Gyeongju where I spent the last couple of days. I'm happy I did it because it was definitively worth it. I took a bus from the bus terminal in Moran and it perfect great because I also had the opportunity to visit the largest traditional market in South Korea, Seongnam Moran.

Going back to the trip story, the bus from this terminal costs about 15000 KRW and it takes around 4 hours to get to Gyeongju, stopping for 15 minutes halfway through. Now I must admit I almost missed my stop at Gyeongju because it was not the final one and the bus terminal is relatively small.

A couple of passengers had left the bus already and when the bus about to leave the stop I went to the front part, asked "Gyeongju?" with a clueless face and the driver a bit annoyed say something like "ye", "ne" or "de", but his bodylanguage was clear, so I quickly descended the stairs and there I was in Gyeongju … pheeew, I almost missed it altogether! 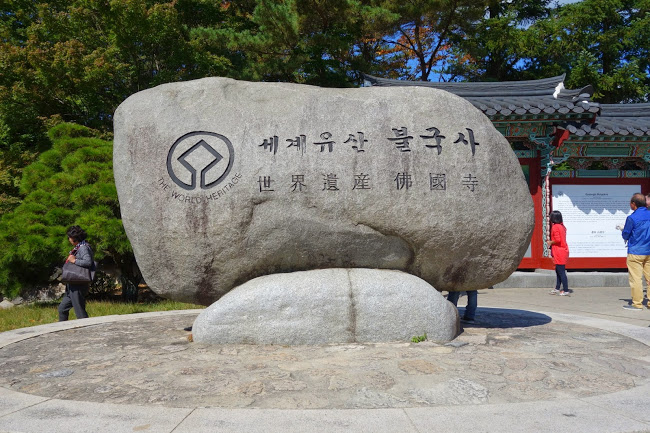 Gyeongju is described in some guides as the cultural capital of modern Korea. This city used to be the center of the Silla Kingdom, that ruled an important part of the Korean peninsula for almost 1000 years!

They developed a well organized society in a city of around 1 million inhabitants and adopted Buddhism as the religion of the state. Based on the number of palaces, tombs, ponds, pagodas, statues and astronomical constructions I saw in the last 2 days, it's don't doubt this used to be a very important place at the height of their kingdom. 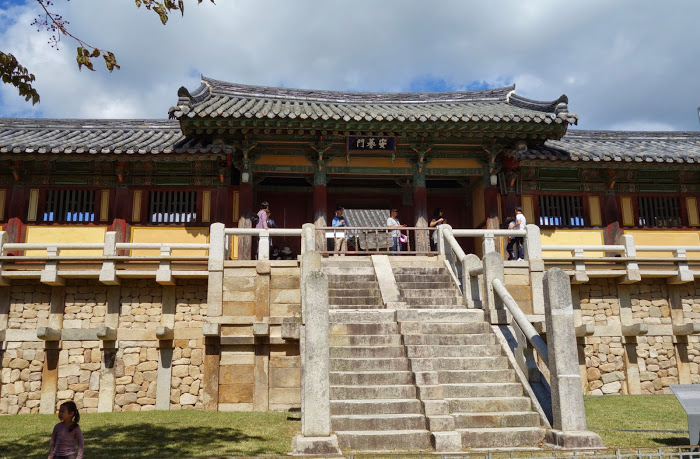 On the first day, just after breakfast, I talked to the host of the guesthouse where I was staying and she recommended me to visit the Bulguksa Temple and the Seokguram Grotto. The temple is accessible by bus from the city center (the number 11 I think) and you can pay either in cash or using a Seoul T-Money card (I'm happy I got one of those),

It takes 30 minutes to get to the slopes of mount Toham where the temple is located and the bus stop is very close to Bulguksa. The place is beautiful containing ponds, pagodas, ancient stairs and of course Buddha statues. It's considered one of the masterpieces of the Buddhist art during the Silla kingdom. 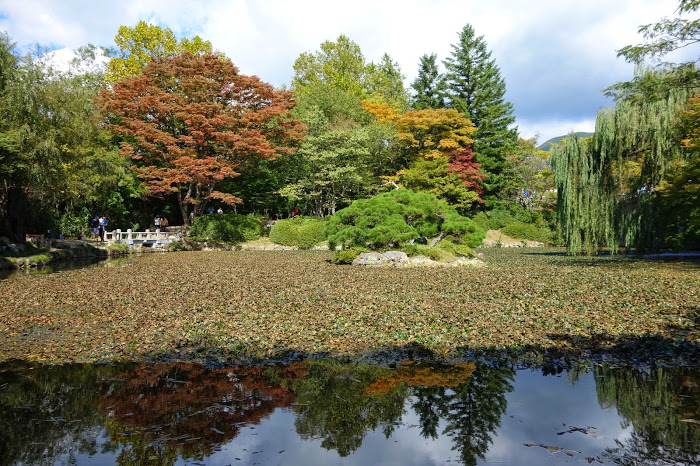 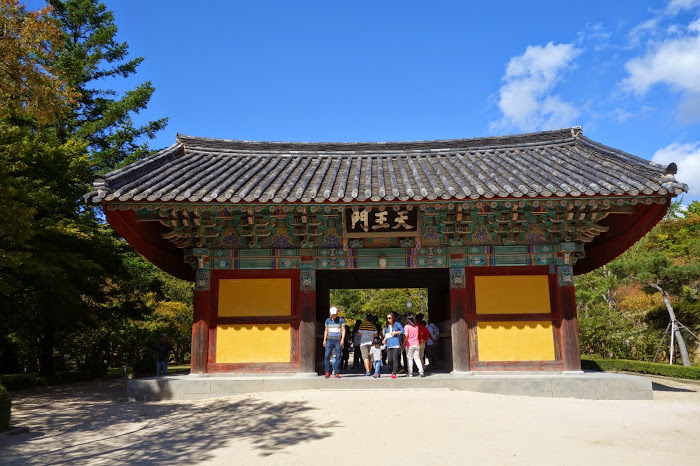 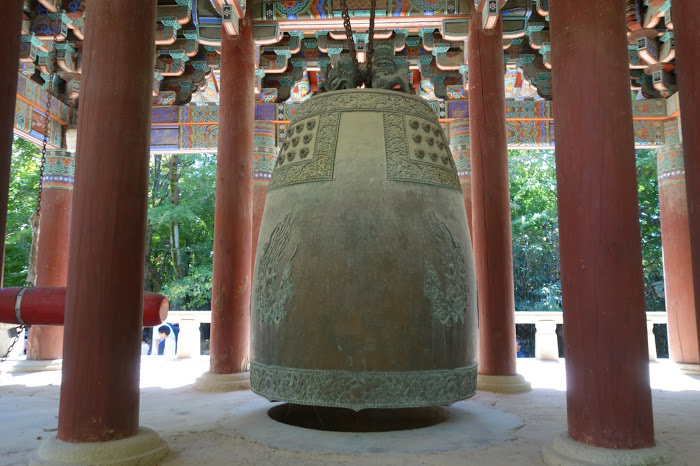 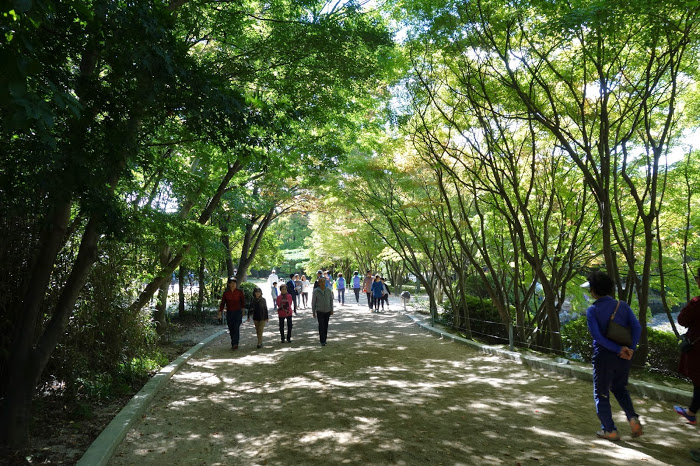 Even if the place was extremely crowded last Friday when I visited the temple, on the positive side, I had the opportunity to experience a traditional Buddhist celebration as you see in the following video:

I spent an hour and a half walking around the temple, reading the history about Bulguksa and the Buddhism in the Silla era. I also took some pictures making most of the beautiful sunny day. I left the temple and I continued to the next stop for the day: The Seokguram Grotto.

I was reading in the tourist map that I could either take another bus or I could walk through the Tohamsan Mountain hiking trail all the way up to Seokguram. I chose the latter option. 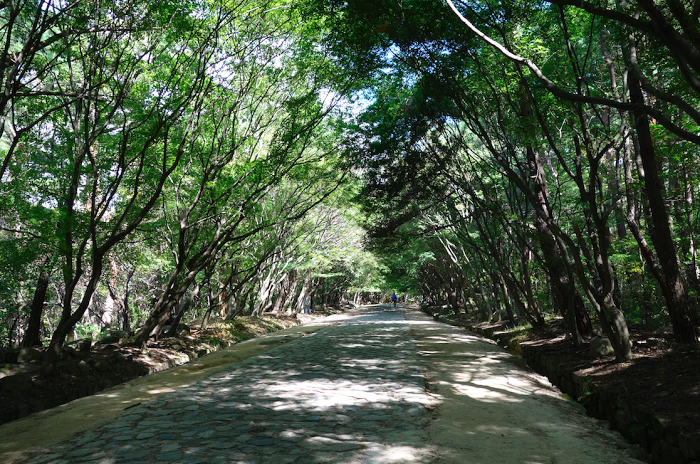 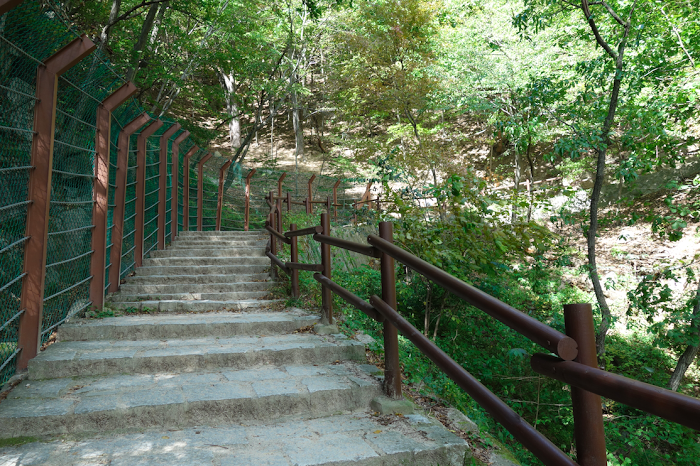 I started to hike and found out the whole path is made out of white stones like the ones you see the in the previous picture. The hike is not really hard but bear in mind you will be going uphill for 1 hour and some of the steps are steep, particularly at the end.

When I began to climb I could hear a bell sound in the distance that turned out to be my constant companion during the whole trip, but the rhythm was quite irregular so I was curious about what it was. When I got to the top I understood the mystery: There is a huge bell that the visitors can play after paying 1000 KRW. Now the view the there was amazing! It felt like a nice reward for the hiking effort. 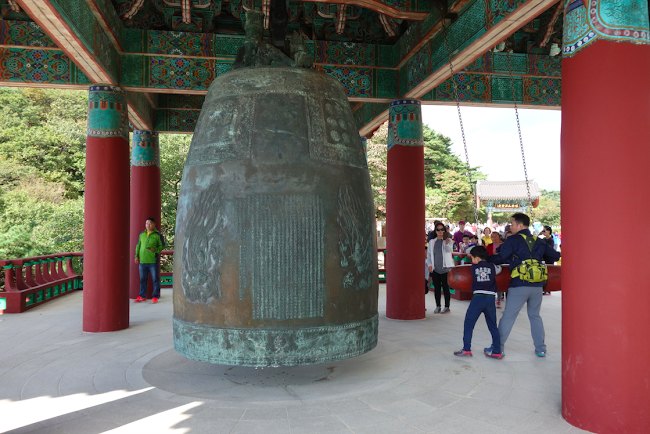 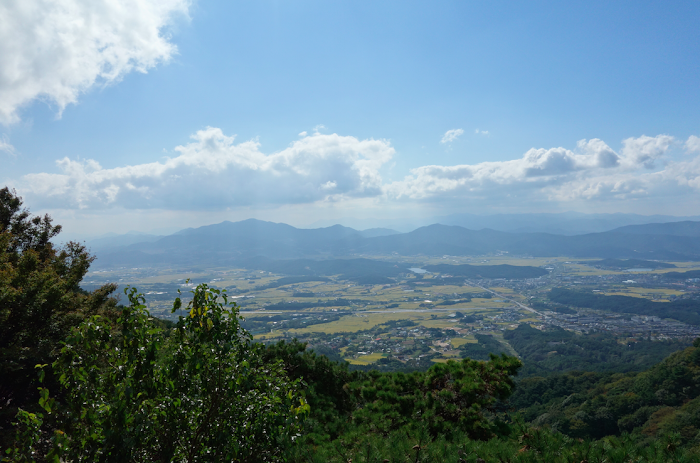 After I sip some water and grabbed a deserved ice cream, I continued the visit paying the entrance fee for the grotto. Unfortunately the site was under renovation covered by scaffolds and other construction materials, so the view was not an amazing as it could be. Nevertheless I was able to admire the Buddha statue in detail.

I finished my visit by hiking down the same path (way easier) and taking the bus to the city. When I was walking back to the guesthouse I passed by one of the royal tombs and there was a huge gathering around it with a traditional dancing and singing show. 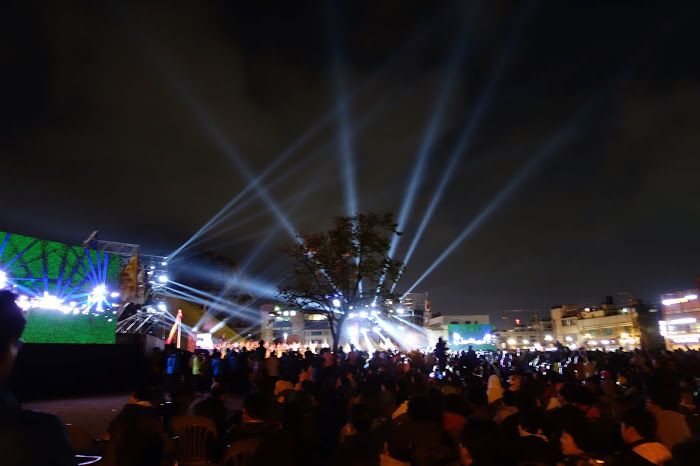 It was a very nice way to wrap up the first day of my visit to this ancient Korean city. I will describe in a separate post my second day, hiring a bike and wondering around the different ancient temples and constructions around the core center of Gyeongju.