Today I'm going to continue describing the second day of my visit to Gyeongju, the ancient Korean city. In the first day I went by bus to the Bulguksa Temple and the Seokguram Grotto, but on the second day I wanted to stay more in the center and do as much walking as possible.

Nevertheless reading the guides and talking to the host of my guesthouse I realized that the "central" attractions were relatively spread around, so walking was not the best option, but biking was a good alternative. They lent me in the guesthouse the "nice" bike you see above.

This is more or less the itinerary I followed, starting from the post office (it's close to the guesthouse): 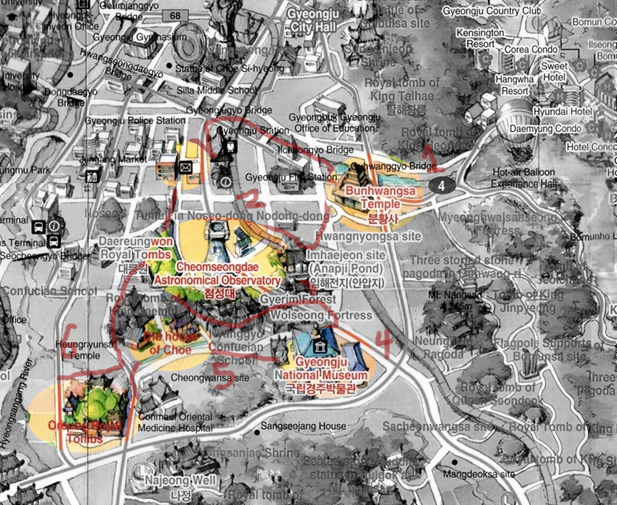 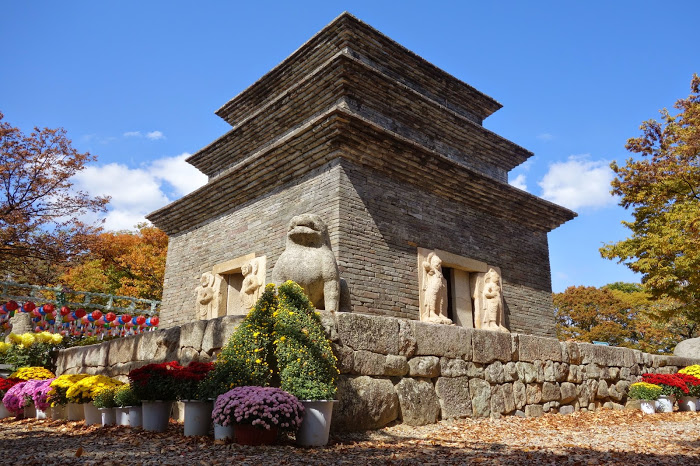 I pedaled  to the train station, I continued heading north until I found a canal and then I turned right and I followed it until I saw in the GPS the Bunhwangsa temple nearby. There was bike parking space on the temple entrance so I left it there, paid the entrance fee (1500 KRW) and started to explore Bunhwangsa.

The name of temple literally means the "Fragrant Emperor Temple" and even if today the temple grounds are relatively small, in the Silla kingdom times,  it used to be an important big complex welcoming many worshipers.

A very interesting landmark here was the stone pagoda you can observe above. This is the oldest dated pagoda from the Silla Kingdom and apparently it used to be 7 or 9 stories high, even if there are only 3 stories remaining today.

There were also a monument pedestal and a typical Buddhist bell, but the Pagoda was the most interesting structure on Bunhwangsa. After I left the temple I briefly visited the grounds of Hwangryongsa, the place of another important Buddhist temple that unfortunately was destroyed during the Mongolian invasions so there is nothing standing. 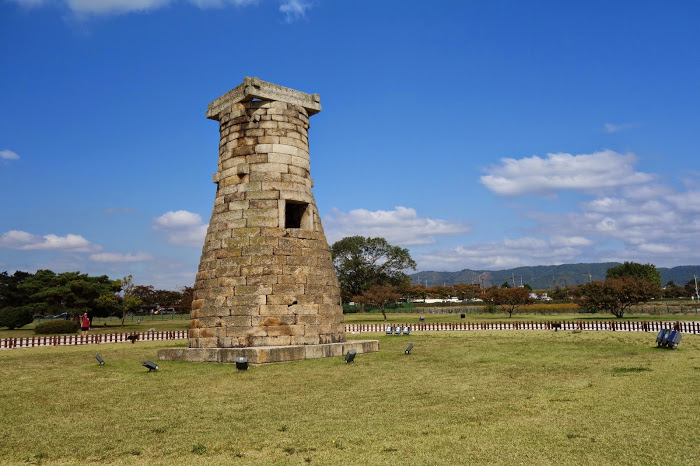 I continued my bike ride going to the central part of the city where the Cheomseongdae observatory is located, next to some of the royal tombs. The day before when I was coming back from the Bulguksa Temple, I could see both of them lit up from the distance so I was looking forward to come back.

I arrived and parked my bike just in front to the observatory, took a couple of pictures and visit an information center nearby. They provide there a very informative multilingual exposition about the observatory and the silla kingdom.

I examined my biking map and the next destination was the Gyeongju National Museum, so I continued riding throughout the park where the observatory is located, but before I arrived there I noticed an structure that looked like a temple but had a banner advertising a show about the history of the Silla kingdom.

I was very curious and the entrance was free so I parked my bike and sat down to watch the show. It was very interesting! They created an realistic animation using the same 3D rendering technology available in most of the modern videogames, to recreate how the Gyeongju landmarks looked like during the Silla kingdom. The film was in Korean with English subtitles. 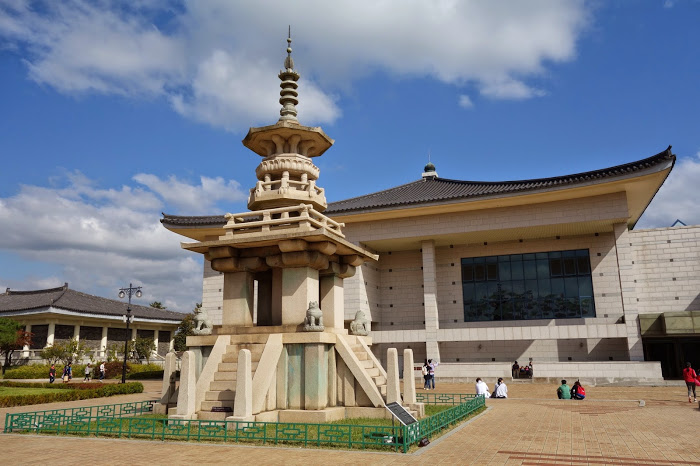 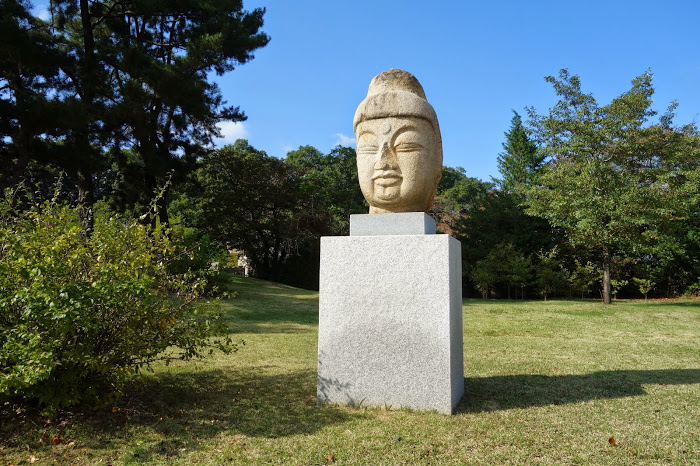 After the film was over I jumped in my bike again to continue to the Gyeongju National Museum. The entrance is free and it's possible to see interesting figures both inside and outside of the main building related to the Silla rulers and the Buddhism during their kingdom.

My final destination for the day was the Oreung Royal Tombs, but when I was on my way there I had to make an additional stop after I saw something that caught my attention. There was a group of houses that looked relatively old but well preserved. They were visible next to a river crossed by a beautiful bridge. 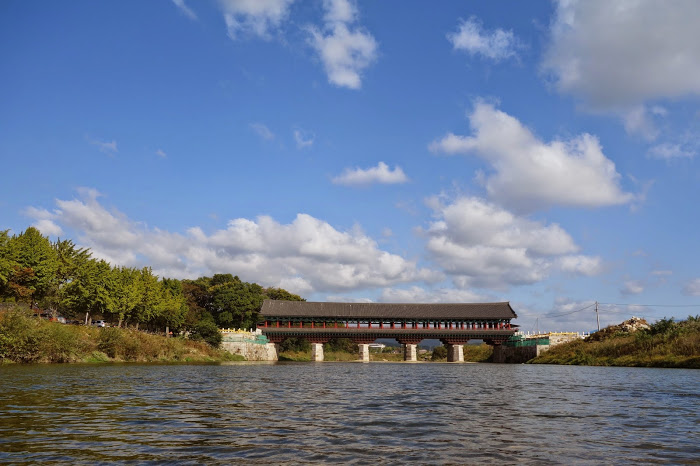 I visited the place without knowing exactly what it was. Later on I found out this house was the main residence of Gyeongju Choi clan. In the house it's possible to visit an area where you can try the traditional liquor they have been producing for centuries. A nice Korean old man dragged me into the line so I could try it! 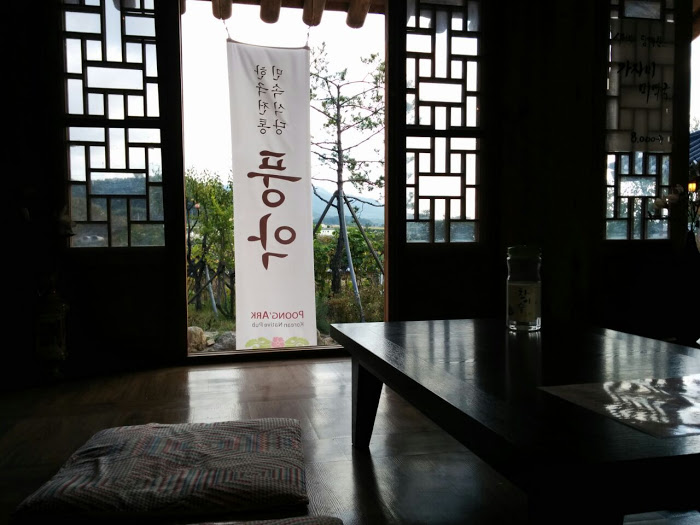 When I was about to leave I saw some people eating nice Korean traditional food in a restaurant / pub, so I made a "pit stop" to fill up the energy tank with a delicious noodle soup in the beautiful place you see above. 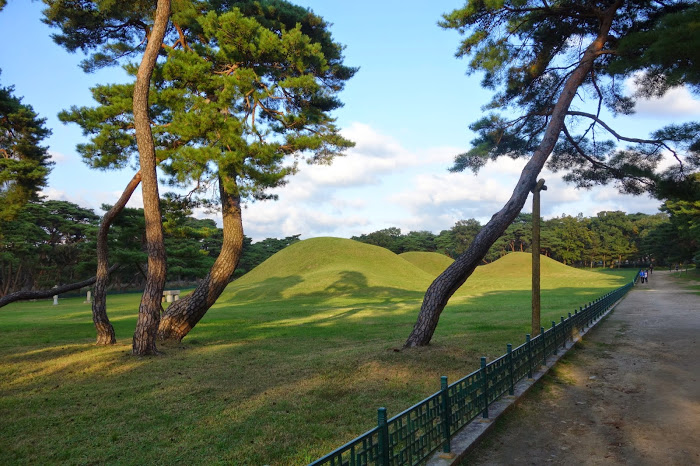 After the quick lunch I grabbed my bike to go to the last scheduled stop of my ride: The five royal tombs complex.

The tombs are similar to the other ones available elsewhere in Gyeongju, but these ones in particular are very important because they are the resting places of four kings including Park Hyeokgeose, who was the founder of the Silla Kingdom.

After this stop I finished my bike trip going back to the guesthouse.

Last Sunday I took the train from Gyeongju to Busan and when I was on my way here I was thinking that I'm glad I made the Gyeongju detour. It was definitively a great place to visit and I could have spent easily two or three days more. 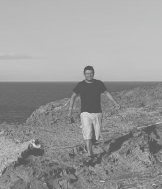