On my second day in Siem Reap I woke up early, got a nice croissant, orange juice, bread and coffee for breakfast and I prepared to start my second visit to the Angkor Wat temple complex by bike. I studied the free map I got in the hotel and Google Maps to pick up a route to follow. I selected the small circuit, planning to visit the main Angkor Wat temple, spend a good time in Angkor Thom, explore the famous Ta Phrohm with its bayan trees and Banteay Kdei.

Based on the exploration from my previous day I knew the best road to get directly to the temple was to go through the Charles de Gaulle road. I left the hotel took the again the Son Sak road, but this time around when I arrived to Sivatha road I headed to the central market getting to the Pokambor avenue, next to the Siem Reap river, leading directly to Charles de Gaulle.

The road was quite busy with cars, tuk tuks and minivans but there was enough room for the ours bikers heading in the same direction. When we arrived to the main entrance point there was a huge bottleneck of people trying to buy the pass, so I was glad I had bought mine the day before, so I was able to beat the queue and continue my trip. The advice of getting the pass the day before was a time saver.

I stopped briefly in the main Angkor Wat temple to take a couple of pictures but I decided to come back later and spend some good time exploring again this temple. I should mention it was around 10am and it was already extremely crowded. Nevertheless with a little bit of patience I was able to find a nice spot to get a nice view of this marvelous place: 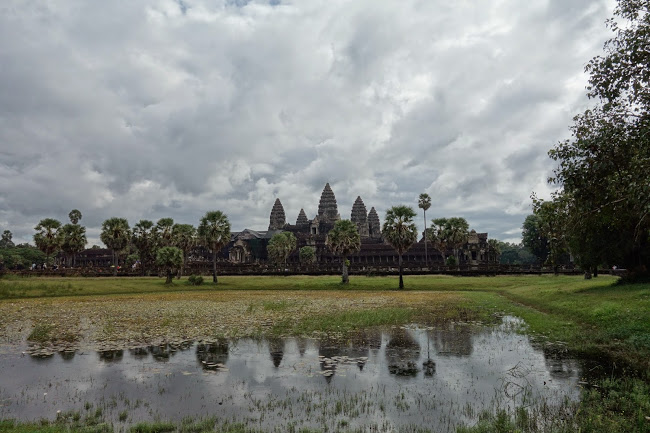 I left the crowds back in Angkor Wat and I continued my bike trip heading north in order to see my next stop: Angkor Thom. I was curious to see this place, because I read it was here that the last capital of the Khmer empire was located and at the center it contained the Bayon, a city state temple, featuring multiple stone faces on the towers composing the structure.

After biking for a couple of kilometers I arrived to the south gate and I started to see the stone faces since they are present in the gates as well. I stopped and I took a picture of this massive face crowning the south entrance: 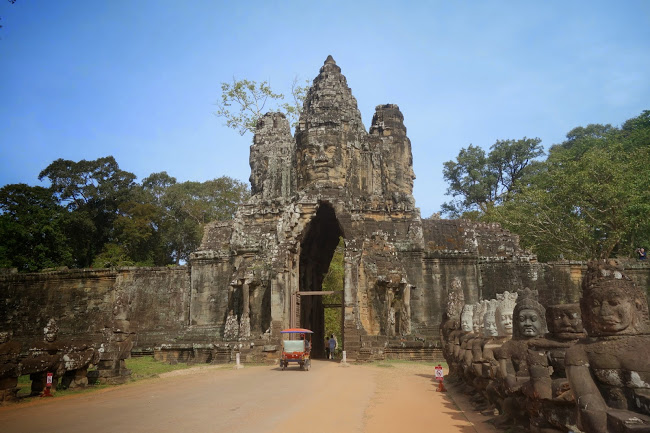 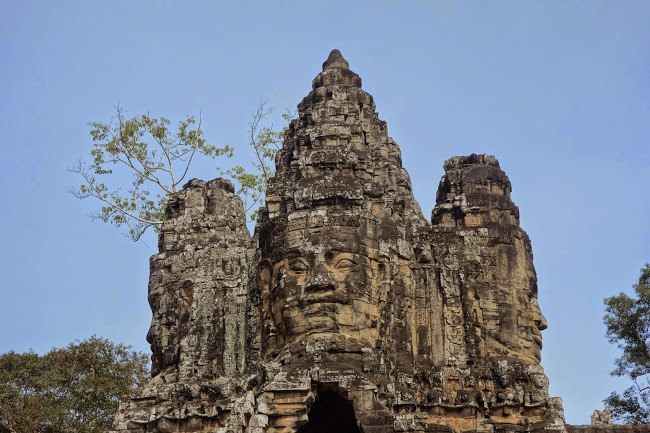 I discovered later on that one of the features of Angkor Thom is those gates located in the 4 cardinal points. I was able to visit the east gate (picking a fortunate wrong turn) and the north gate when I was leaving the complex. The construction and features are very similar,

Once I flanked the gate I continued biking north and shortly I arrived to Bayon. From the distance the structure didn't look as majestic as the Angkor Wat temple, but still it was quite impressive: 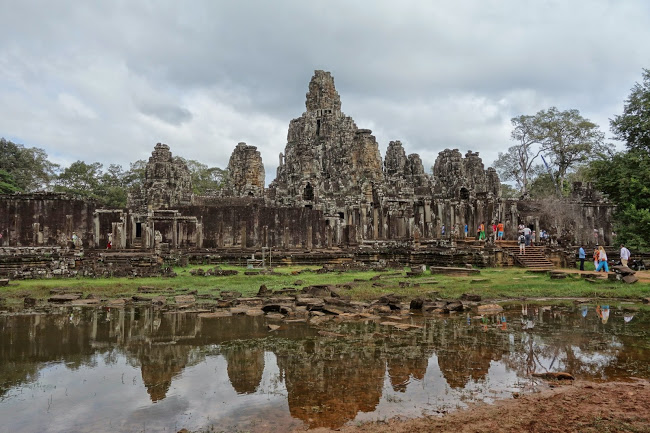 I parked my bike, showed my pass to the employee and the entrance and I started to visit Bayon temple looking around and staring at the different stone face towers. There are more than plenty faces to see. 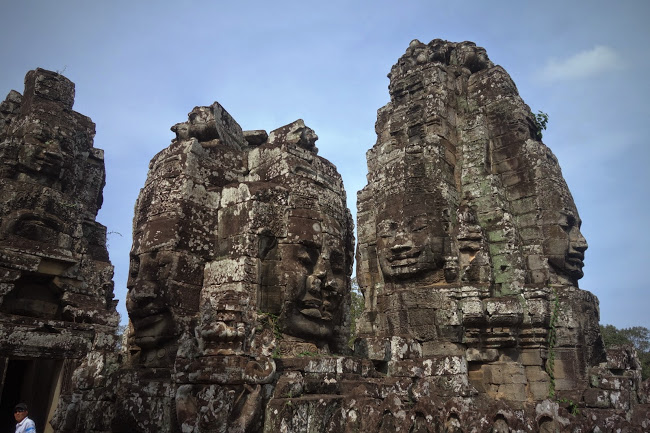 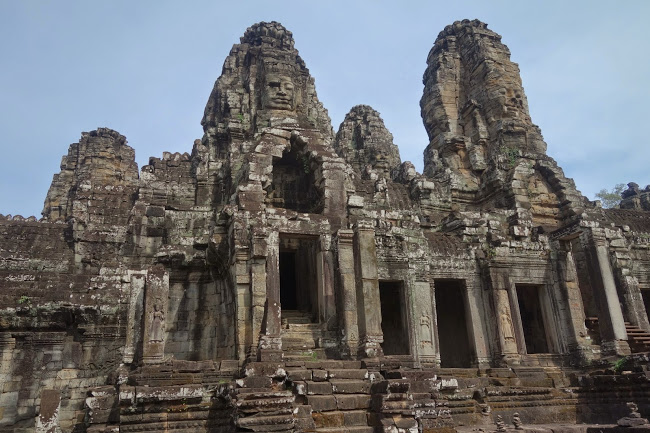 It was striking that almost all the faces looked like each other and later on that night I learned this fact was not a coincidence: many experts believe those faces are representations of the king Jayavarman VII, who established the city in the 12th century. Looking at the images of the available sculptures depicting this king, there is definitively a resemblance.

At this stage I had to find a shadowy spot and rest for half an hour, while drinking and pouring water on my head because it was extremely hot.

Once I cooled down and I regained my strength I jumped back in the bike and started to going north but before leaving the Angkor Thom area I visited a couple of structures more: Phimeanakas, a hindu temple, the terrace of the leper king and the elephants terrace.

Once I finished these visits I continued pedaling and once I flanked the North Gate a car pulled over next to my bike. The person in the backseat lower his window and I saw a smiley guy who asked me in english "Excuse me sir, but may I borrow your bike for a couple of minutes?". I guess the expression of my face asked right away a suspicious "Why?", because he continued: "You see we just got married and we are taking pictures and a picture on a bike would be nice.". I agree and the picture looked more or less like this: 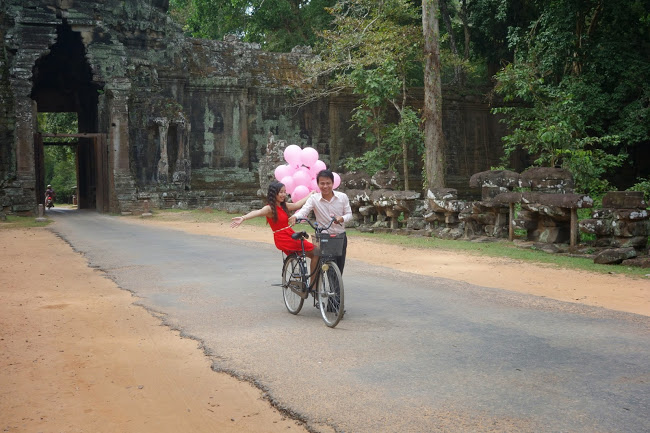 After I got my bike back and left the happy couple behind, I continued my itinerary to Ta Prohm.

The Angkor Wat temple is majestic and the Bayon temple is quite particular with its multiple stone faces towers, but Ta Prohm was my favorite one because of the impressive scene of beautiful ancient ruins been devoured by massive Bayan trees: 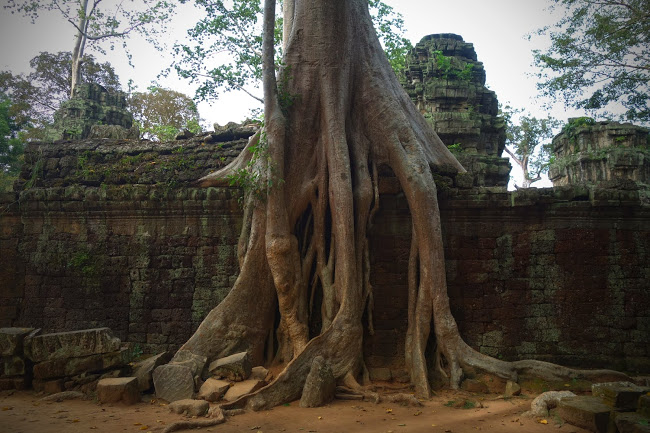 When I visited Tainan in Taiwan, I went to an old house taken over by this type of vegetation, but after visiting Ta Prohm, that tree house looks like a doll house in comparison.

The history of the current state of this temple is interesting. The Khmer Empire waned in the 17th century and Ta Prohm was abandoned and forgotten for many centuries. When the French started to restore it, they decided to leave the bayan jungle that had taken over the ruins.

They invested resources in stabilizing the structure and keeping it safe, while maintaining the picturesque scenario and it looks amazing: 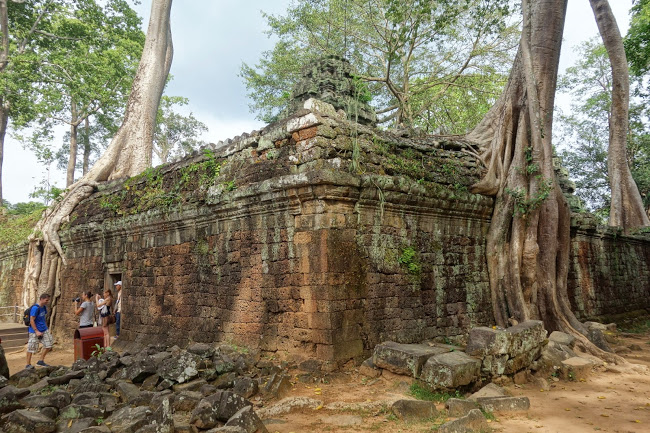 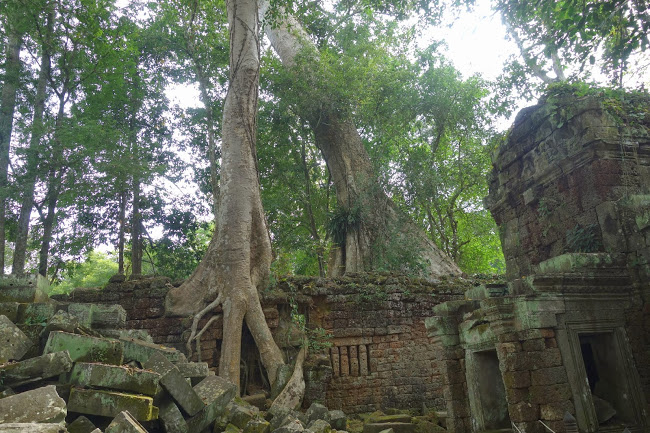 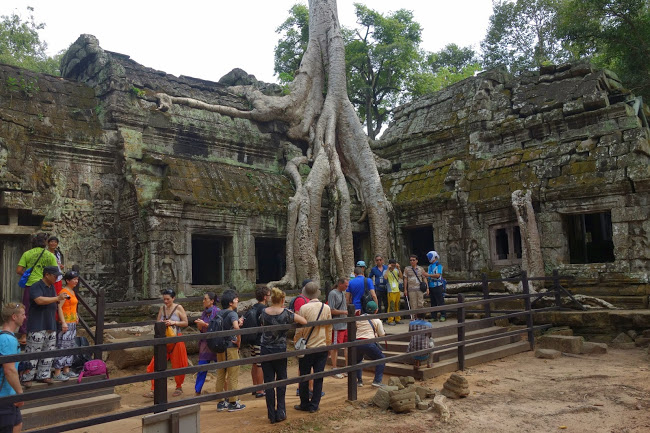 After visiting this temple I stopped briefly at Banteay Kdei and I bought a bottle of water from Sreykun, a Cambodian girl, with a small stall near the temple. After I finished this last stop, I started to cycle back to Siem Reap.