Bangkok to Penang by overnight train. 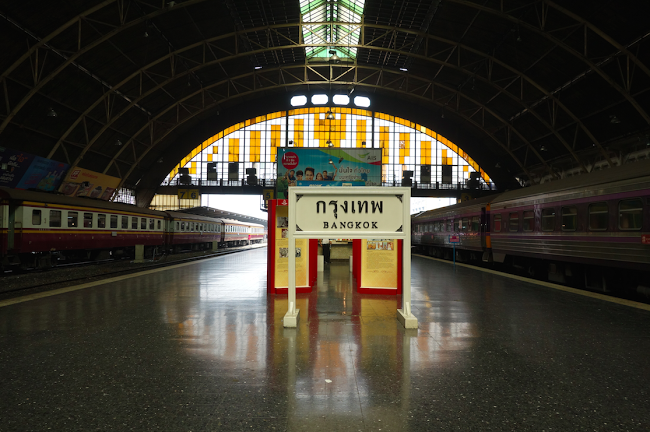 I have been writing this blog in chronological order, but I would like to make an exception today because I have a fresh blogpost I that want to publish as soon as possible. Consider this as a small parenthesis from Cambodia to jump to Thailand.

Yesterday I finished a trip from Bangkok to Penang by train and ferry. I thought it would be interesting to write a blogpost with my phone on a diary format or rather "hourly" format documenting the travel. Here is the result.

14:22: I just boarded the train to start the long trip by train from Bangkok to Butterworth, in the northern coast of Malaysia. As you can see above in theory the trip is going to last 22 hours. I'm takin the train 35k leaving at 14:45 and arriving tomorrow at 12:55.

I had to buy the train ticket a couple of days in advance to get a lower berth. Now I see it was worth it, there is definitively more space. Actually the upper berth looks a bit claustrophobic.

14:45: I was wondering if the train was going to leave the station on time and indeed it left sharp at quarter to three. I feel lucky because I don't have anyone in front, therefore I will be able to stretch my legs comfortably. yey! 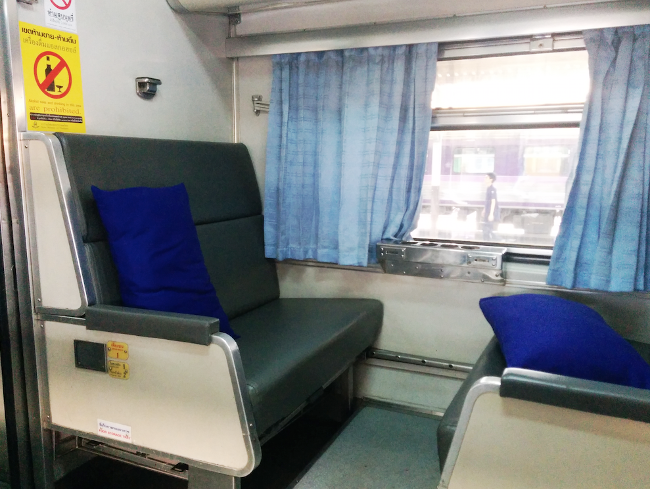 15:45: We are just leaving the city limits of Bangkok. There are many crossings within the city so the train had to go really slow. Additionally, it had to go northbound until it reached Bang Sue. It took us almost half an hour to get to there. As soon as we left the Bangkok station they started checking the tickets.

We just passed Nonthaburi and the train is beginning to pick up speed. 86 km/h seems to the max. speed.

16:21: We just arrived to Nakhon Pathom. I came here briefly last time I came to Bangkok. This city has one of the biggest and oldest Chedis. I felt it was closer last time, but it's true I left from the Thomburi station on that opportunity. 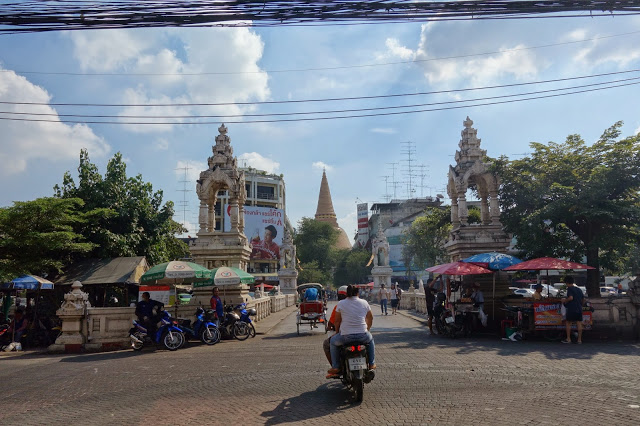 17:15: Now we are heading south. We just arrived to Ratchaburi. Apparently this city has a nice floating market. Maybe next time.

18:12: We just left the Phetshaburi station. Now it's getting dark. I just noticed that there is a security guard on each wagon (police?)

19:14: I just finished my dinner. They sell meals on the train but I bought in Bangkok some rice, a Thai spicy tuna salad and bananas, so that was my dinner. I was checking the map and we are riding along the sea in the gulf of Thailand.

19:55: The employee of the Thailand Railways came here and in 30 seconds converted my seat in a comfortable bed where I will sleep tonight (hopefully). I think today I'm going to get a good use case to tryout the earplugs. 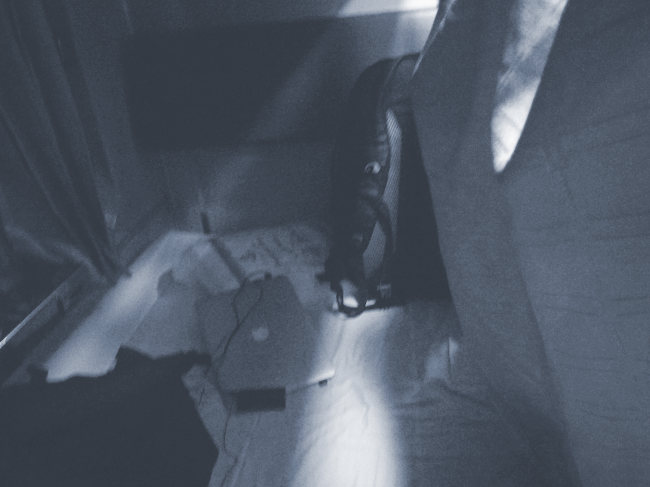 20:15: We are about to pass through Prachuap Khiri Khan. Based on what I can see on the map this is one of the narrowest parts of the country, just in the border between Thailand and Myanmar.

10:45: I think we are in the middle of nowhere. The map shows a town called Chumphon but nothing else really.

11:59: It's almost midnight and I don't feel very sleepy. I'm listening coldplay and reading the Wikitravel guide of Penang and Georgetown. The lights are on but with all the curtains are down so it is not too bright. I was thinking that I have been in this train for almost 10 hours. Here is sneak peek on how the train looks now:

3:00: it's pretty noisy over here. I think the constant pffffff of the pneumatic door wake me up. I think a good advice would be to get a Berth further down the hall. I'm going to try to sleep a bit more.

5:00: I think I dozed off a couple of times but I didn't really get any deep sleep. Part of the problem was to be so close to the door. Nevertheless it was nice to lay down and rest.

I will try to catch up more sleep once I'm in Malaysia. We left Phattalung. I think this is the last stop before we arrive to Hat Yai. That is the last city on the Thai side of the border.

6:15: We are very close to Hat Yai and I just opened the curtain to enjoy the sunrise. The Sky is beginning to get a nice orangish hue. 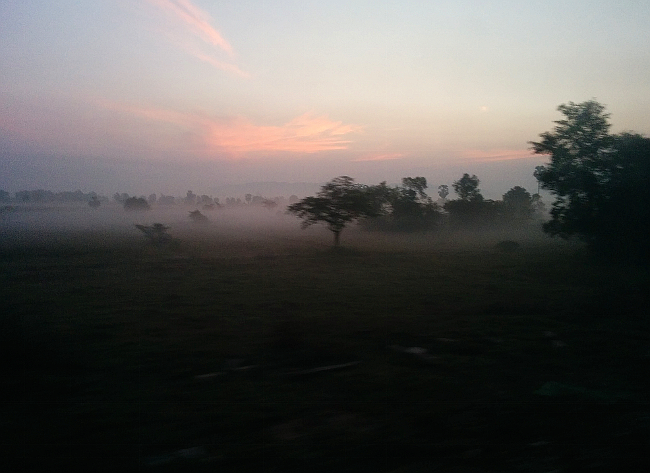 6:44: We just left Hat Yai. I don't know if they had to change something in the train for the Malaysian gauge. The train moved back and forth for a couple of times and now it stopped completely. Meanwhile I dude just passed by selling Malayan currency. clearly we are close to the border.

7:00: We are moving again I think the next stop is going to be Padang Besar in the border between the 2 countries.

7:49: My bed was converted back into a seat. Again it took the employee not more than 30 seconds to do it.

8:15: we arrived to the Padangbesar immigration check point. We descended the train and now we are queuing on the Thai side. 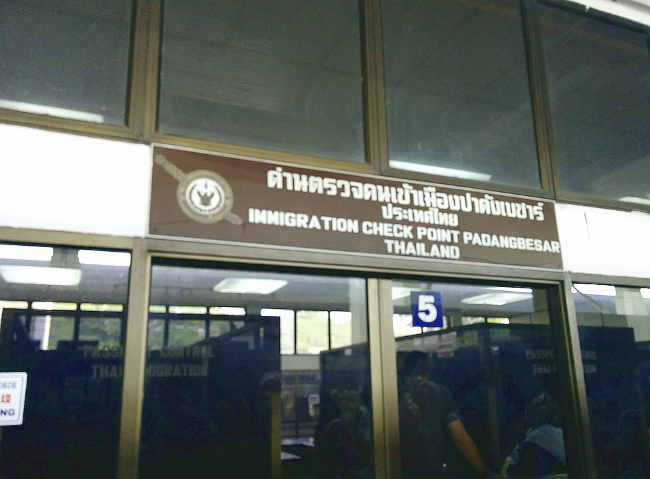 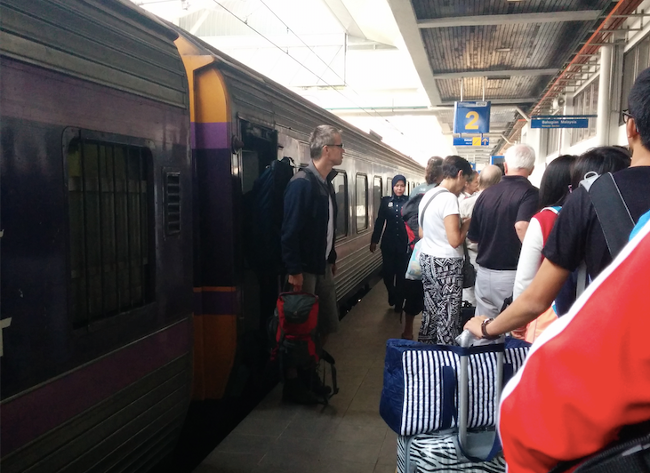 8:48 -> 9:48: I'm switching to GMT+8 since we are in Malaysia now. I crossed the Thai emigration point and the Malaysian immigration and customs point. It was straightforward and I even had the time to quickly pass by the cafeteria upstairs and get a Sandwich for breakfast. They even accept Thai baths

10:00: We start our trip again leaving behind the checking point. There was an English guy in front of me who overstayed in the country. He had to pay a fine and he had to wait aside. I'm wondering if he made it back to the train.

10:21: We arrived to the Arau and this is clearly Malaysia. The train station architecture had an in distinguishable Muslim influence. 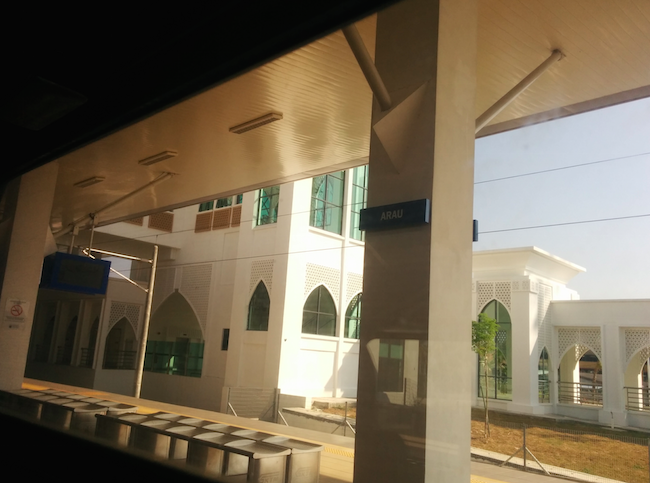 11:31: we just left Sungai Persnickety so we are about to enter the state of Penang.

12:15: We just arrived to Butterworth. This is the end of the train ride from Bangkok. We arrived a little bit earlier than expected! Great!

12:20: Now I understand why there was this guy selling currency on the train. There are no ATMs or Money Exchange stalls in the station. I will have to go to the town and get money there. 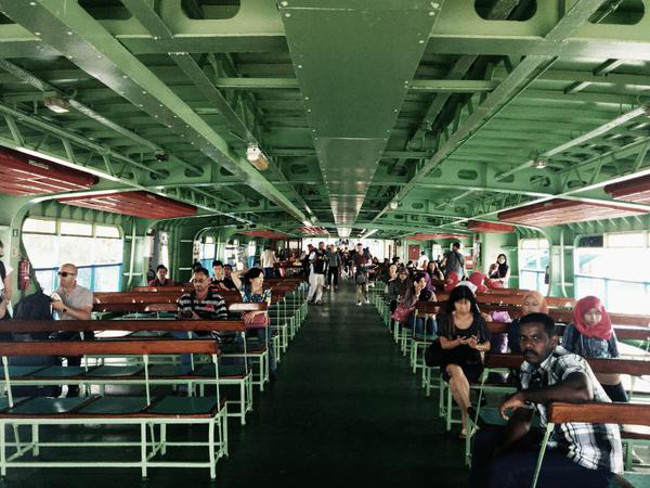 13:00: I'm went to town got some money from an ATM machine, came back to the train station and I walked through a pathway to get to the ferry station I paid 1.20 MYR and I'm in on my final way to Georgetown in Penang: 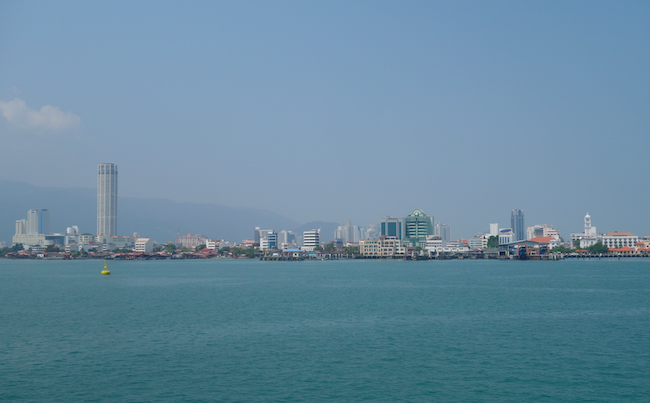